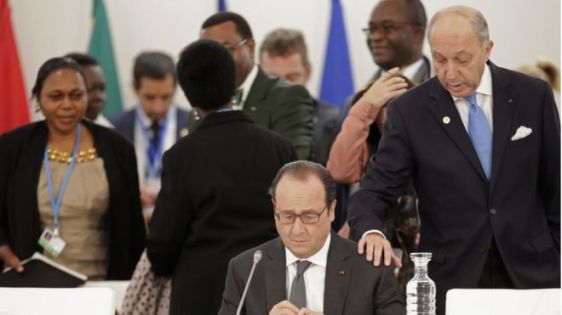 Everyone said the right things. The prospects of a deal, haven’t been harmed, even if they weren’t hugely advanced.

On Tuesday the more regular routines of COP life kicked in.

The day started with a plenary session of the parties, where every nation’s negotiating team is represented.

This involved formal opening statements, summing up the key points from each country’s perspective.

Right now there are three layers of negotiation going on.

At the very bottom, dozens of informal meetings are taking place in all corners of this massive complex

Groups of countries, often just a handful, are working through a paragraph of text at a time.

Channelling Donald Rumsfeld, these meetings have been dubbed “informal informals”.

The next layer up is what are termed facilitated sessions.

Facilitators have been appointed by the co-chairs of the ADP (Adhoc working group on the Durban Platform for enhanced action, if you want to be formal about it), the part of this overall meeting that’s delivering the new deal.

There are between ten and 20 of these strands, looking at elements in the text and trying to streamline it and find compromises.

They’ve already been working very late, indicating some progress is being made.

On top of this, according to those familiar with the process, is a new, “open ended contact group” of negotiators that will try to bring together all the links between all the different elements in the proposed agreement.

The hope is that by Saturday, the current text that runs to more than 50 pages will have been slimmed down somewhat or at least knocked into a fashion where it can be handed over to the French president of this meeting, Laurent Fabius.

He has promised to take it to the environment ministers who will arrive next week to make the difficult political decisions.

“No hidden agenda, no secret plan, no text in our pocket,” he told the meeting.

He then hopes to guide the negotiations to a successful conclusion and to utter the four words that climate delegates have been waiting years to hear.

“Our mission is accomplished.”

Source: Now that the leaders have left COP21, what happens next? – BBC News