The Canucks will go for their third consecutive season sweep of the Hurricanes, while Carolina will try for their 5th win in a row against.

In their last game, Vancouver visited the Washington Capitals in the first game of their road trip last night at Verizon Center. The Canucks brought a 2-0-1 record in their last three games on the road into the game, looking for a third road victory in 4 games, and to end the Capitals 10 game home winning streak.

VANCOUVER, BC – JANUARY 6: Kris Versteeg #32 of the Carolina Hurricanes reaches to check Jared McCann #91 of the Vancouver Canucks during their NHL game at Rogers Arena January 6, 2016 in Vancouver, British Columbia, Canada. Vancouver won 3-2. (Photo by Jeff Vinnick/NHLI via Getty Images)

But alas, it was not to be, as Vancouver, lost a tough one on the chin, 4 to 1, to the top team in the NHL, the Washington Capitals (33-7-3), who extended their consecutive winning streak at home to 11 straight games.

“I look forward to facing them again. They’ll be fresh in our memory from when we saw them last week.”—Jacob Markstrom on Canucks Twitter.

Jared McCann will be in the lineup in place of Derek Dorsett who has the flu.

Taylor Fedun will his Canucks debut tonight in place of Yannick Weber.

“I’ve had lots of ups and downs which have allowed me to get where I am today. I’m reallly looking forward to tonight.”—Tyler Fedun on Canucks Twitter.

In the jammed Pacific division, except for top spot held by the Los Angeles Kings, positions 2nd thru 6th are wide open for the taking, and the Canucks have been making a steady upward move in the standings towards one of the two remaining playoff spots in the division. They are 5 points out of 2nd and 2 points from 3rd place; 1 point ahead of Anaheim in 5th; 2 points in front of Calgary in 6th.

In their last game, Carolina brought a three-game winning streak – all divisional victories – into a cross-conference game in St. Louis with an injury plagued Blues team last night . After back-to-back wins against Columbus, and the Pittsburgh Penguins.

The Hurricanes defeated the St. Louis Blues for their 4rth straight win, 4-1 at Scottrade Center on Thursday night.

Brett Pesce, Brock McGinn and Riley Nash scored for the Hurricanes;  Jeff Skinner had a goal and an assist and goalie Eddie Lack made 23 saves.

According to Canucks.nhl.com, Cam Ward may get the chance to extend Carolina’s winning streak to five games after Eddie Lack made 23 saves in a 4-1 victory at the St. Louis Blues.

In the tight Metropolitan division, except for top spot held by the Washington Capitals, positions 2nd thru 7th are wide open for the taking, and Carolina has been making a steady upward move in the standings towards one of the two remaining playoff spots in the division. They are 6 points out of 2nd; 4 points from 3rd place, and tied for a share  of 4rth with New Jersey, going into the game tonight. 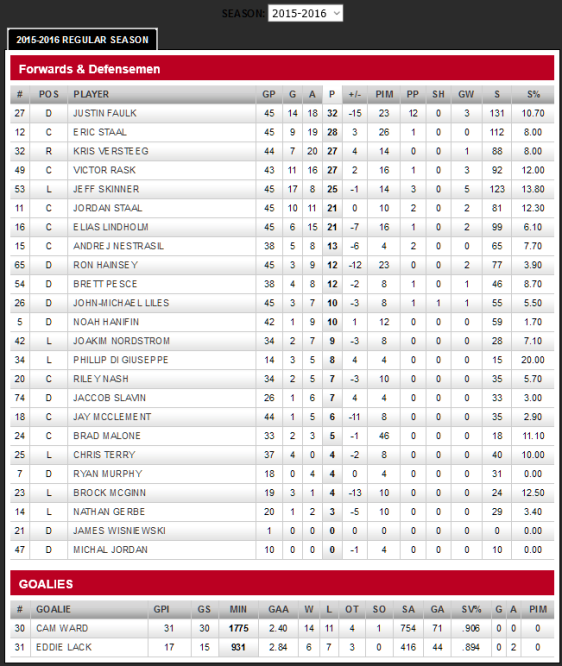