Vancouver are going after their second win of the road trip, after splitting games in Washington and Carolina.

The Islanders are looking to sweep their three game home stand as they host the Vancouver Canucks in the first of two meetings between the teams this season.

Vancouver’s Bo Horvat has been red hot in 2016, and sits tied for 2nd place in NHL scoring with 9 points (6-3=9 PTS), courtesy of a 6 game points streak. He is also tied for the most goals in the New Year with his 6 goals, with Sam Bennett of the Calgary Flames.

RALEIGH, NC – JANUARY 15: Bo Horvat #53 of the Vancouver Canucks celebrates with teammates after scoring during an NHL game against the Carolina Hurricanes at PNC Arena on January 15, 2016 in Raleigh, North Carolina. (Photo by Gregg Forwerck/NHLI via Getty Images)

Vancouver is 10-9-5 against Eastern Conference teams; and 5-5-1 against the Metropolitan division.

Luca Sbisa, Jannick Hansen and Derek Dorsett, are expected to be in the lineup tonight. Ryan Miller gets the starts against the Islanders.

Sbisa has missed 18 games since December 3rd with an injured hand; Jannick Hansen missed 4 games since January 6th with an upper body injury; Dorsett missed last game due to the flu.

In their last game, Carolina took Vancouver to overtime, but in the end, the game would belong to the Canucks, as they would take their third consecutive season sweep of the Hurricanes; snap Carolina’s consecutive winning streak at 5 games; win their third overtime game, in their last 9 games; and win their first game of the road trip, defeating Carolina, 3-2 in OT.

Bo Horvat, with his second goal of the game, and 8th goal of the season, would put the game away for Vancouver in the overtime, at 3:25.

RALEIGH, NC – JANUARY 15: Jacob Markstrom #25 of the Vancouver Canucks goes down in the crease to protect the net while teammate Alexander Edler #23 defends and Eric Staal #12 of the Carolina Hurricanes looks to deflect the puck as it goes just wide of the goal during an NHL game at PNC Arena on January 15, 2016 in Raleigh, North Carolina. (Photo by Gregg Forwerck/NHLI via Getty Images)

The Canucks sit in 4rth place with 46 points in the Pacific division, led by the Los Angeles Kings, who have 57 points. The Canucks are 2 points out of 3rd; and 3 points out of 2nd place. Vancouver is 1 point in front of Anaheim; and 2 points ahead of Calgary.

In their last game, the Islanders Brock Nelson and Nick Leddy scored goals  early in the third period, as the Islanders rallied from behind 1-0 for a 3-1 win over the New York Rangers at home. It was only the 2nd time in the last six seasons (154-2-6) that the Rangers had lost a game in regulation after leading through 40 minutes.

Jaroslav Halak stopped 34 shots, and improved to 11-8-3 this season.

In the tight Metropolitan division, except for top spot held by the Washington Capitals, positions 2nd thru 7th are wide open for the taking, and the Islanders have been in the thick of things most of the season in battling for one of three playoff spots in the division. They are tied for 2nd with their New York rivals, the Rangers, with 53 points each, 16 points behind division leading Washington.

ON THE ROAD AGAIN 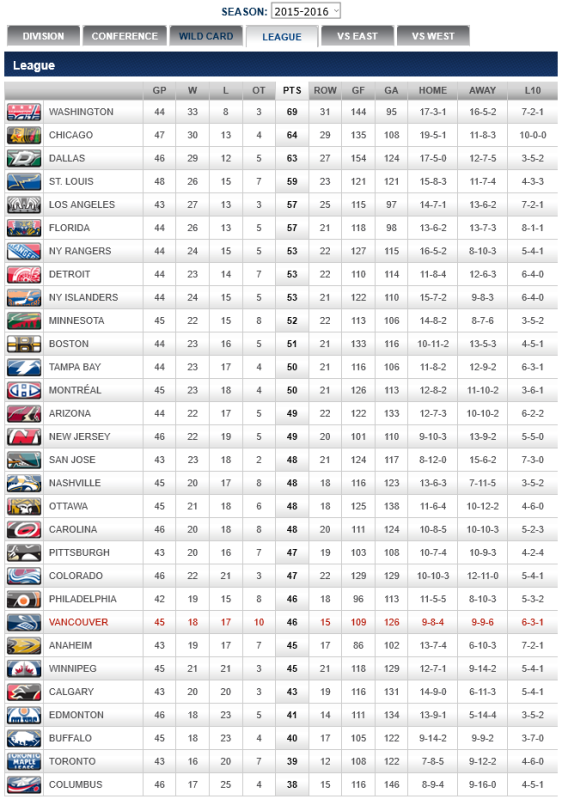