Simply put, the Canucks entered the game looking to end a 4-game losing streak with a victory against the Avalanche handing Colorado their 4rth straight loss.

Anything less would be unacceptable, and further indication that golf would be waiting for Vancouver in the Spring.

Vancouver could not find a way to win against division rival Calgary Flames, but they did against Colorado, ending their four game losing streak with a 3-1 win. 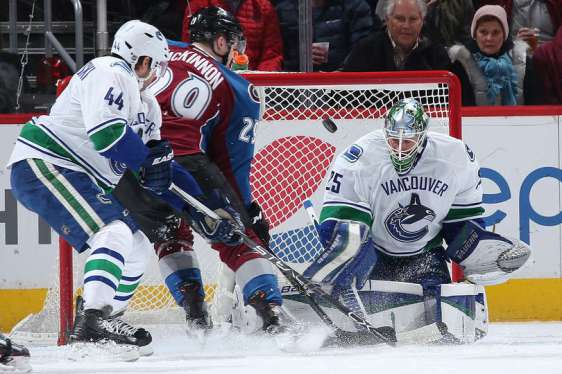 Arizona is up next for Vancouver, tomorrow night.

Canucks did not have a good start to the opening period as the Avalanche were able to put a little pressure on the Canucks in their end, and make trouble around the Vancouver net.

Canucks would get the first 3 shots on net, trying to jump on the rebounds given up. Colorado got their first shot on net at 4:18.

After getting their first shot on net, the Avalanche turned up the heat, trapping the Canucks in their end, and putting shots on Markstrom who was forced to make a couple of impressive saves to keep the game scoreless.

Last half of the opening period was being dominated by Colorado early and well into it, as they kept Vancouver in their end for a lot of time while working their magic but with Markstrom’s help, Vancouver kept frustrating the Avalanche, eventually getting some scoring chances of their own.

The Avalanche would get the first power play of the game, when Sven Baertschi would be sent off for elbowing Andrew Bodnarchuk at 16:24.

With the Avalanche with a few scoring opportunities, and pressing for more, they would get a two-man advantage when Bo Horvat would be penalized for high sticking Nathan MacKinnon at 17:47.

With one penalty killed off, and the other almost done, Luca Sbisa would receive two minutes for holding the stick of Gabriel Landeskog at 19:20, giving the Avalanche another 5-on-3 advantage, this time for 20 seconds.

The Canucks would end the period shorthanded, with the score 0-0.

In the middle period, the Avalanche would score early but not on the power play they came into the period with.

The opening game goal was the second game in a row that Vancouver surrendered the opening goal.

The Canucks would get their first power play of the game when Nick Holden would be called for holding at 7:39 off a rush by Derek Dorsett who would go in on the Avalanche goalie trying to even up the score.

Just four seconds after the power play, Matt Bartkowski would get Vancouver’s tying goal, his 3rd goal of the season, to make it 1-1, at 9:43, on a snap shot, assisted by Alex Burrows (9) and Ben Hutton (13).

Sven Baertschi would be in the sin bin for the second time in the game at 10:32 for high sticking Tyson Barrie; Colorado’s fourth power play of the game. Canucks would kill their fourth penalty of the game but Brandon Sutter would be lost after getting hit in the face with a puck.

Canucks would get some good scoring chances to go up by a goal, to by stymied by the Avalanche goalie.

But persistence would pay off, as Vancouver would finally score. There would be some discussion by the referees, and the Avalanche would put a challenge in,claiming interference, but it was ruled a good goal.

Canucks started the final period without Alex Edler or Brandon Sutter, both injured in the second period.

Vancouver looking to finish the period the way they started it, with the lead, and end their four game losing streak.

Luca Sbisa, would get the puck from Jacob Markstrom, who make a great rush down the ice, setting up Bo Horvat for the 3-1 goal, to go up by two goal over Colorado.

With 8:04 left in the game, shots in the period were even at 5 each but the Avalanche were leading in face-off wins at this point of the game, 31 to 13.

Colorado pulled their goalie Varlamov with 3:38 left to get an extra attacker in an effort to get within a goal of Vancouver.

The ploy would not work for the Avalanche and Vancouver would win the game 3-1.