Get the report
Budget 2016: Key Issues for Parliamentarians.pdf

Summary
The presentation of the fiscal plan

The Government has made changes to the presentation of its fiscal plan that have made it more difficult for parliamentarians to scrutinize public finances.

To maintain consistency with past presentation practices, PBO has attempted to compile the standard fiscal planning tables for Budget 2016. However, PBO is unable to provide completed tables due to the lack of information provided in Budget 2016. PBO requested the necessary data from Finance Canada in order to publish completed tables for parliamentarians. 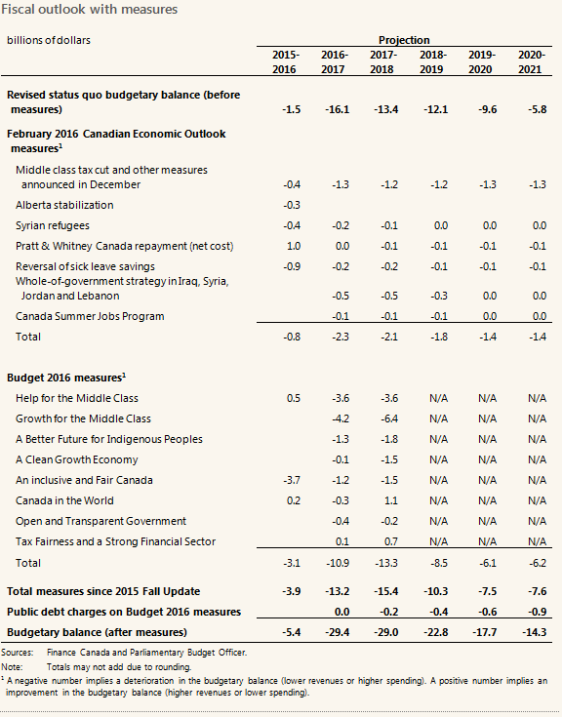 Budget 2016 highlights that the use of private sector economic forecasts for fiscal planning “introduces an element of independence in the Government’s fiscal forecast.” However, in Budget 2016, the Government judged it appropriate to lower the private sector forecast of nominal gross domestic product (GDP)—the broadest single measure of the tax base—by $40 billion per year over 2016 to 2020. This forecast adjustment translates into a fiscal impact of $6 billion annually over 2016-17 to 2020-21.

Based on historical experience, PBO believes that the $40 billion per year forecast adjustment to the February 2016 private sector forecast of nominal GDP in 2016 and 2017 is excessive. Indeed, based on the past performance of private sector forecasters, it is likely that the actual outcome for nominal GDP in 2016 and 2017 will exceed the levels used for fiscal planning purposes, resulting in smaller-than-expected budgetary deficits in 2016-17 and 2017‑18, all else being equal.

To provide parliamentarians with an independent estimate of the economic impacts of Budget 2016 measures, PBO has used its own macroeconomic and fiscal model. On balance, these estimates are somewhat smaller than Finance Canada’s.

PBO’s estimates assume that measures in Budget 2016 will be implemented as scheduled and as targeted. Aside from the uncertainty surrounding fiscal multiplier estimates, differences in timing (for example by lapsing funds) or in the targeted sector would impact these results.