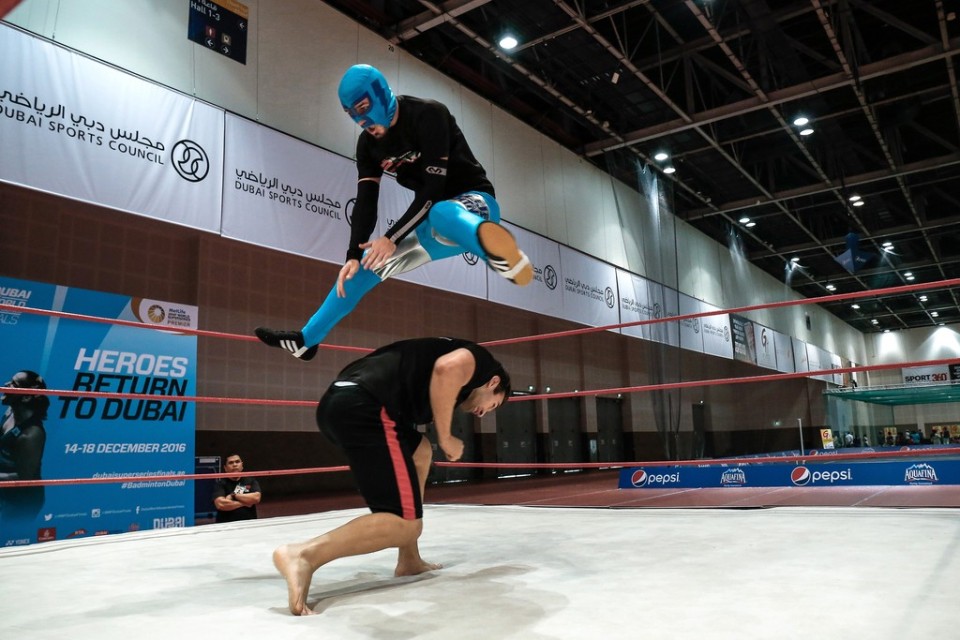 Masked fighter Blue Lighting and Caleb Hall, coach and founder of DXB Pro Wrestling Academy, shape up at the launch of Dubai Sports World 2016, the largest indoor sporting event in the Middle East, which runs until the end of August. Victor Besa for The National

The sixth Dubai Sports World (DSW) is under way at the Dubai World Trade Centre.

The largest indoor summer sports attraction in the Middle East is free to enter and will run until August 27 in the trade centre’s Sheikh Saeed halls 1, 2 and 3.

Serious athletes and novices can train under the supervision of professional sportspeople in a variety of disciplines.

There are six basketball courts, three courts for tennis fans, eight badminton courts, while a mini cricket pitch and a regulation-sized volleyball court have also been set up for the event.

A state-of-the-art gym and a dedicated fitness studio for group classes and a cycling studio are also open, as is a free-to-enter ping pong zone with 12 tables.

Aspiring cricketer Ahmed Kamal was excited that he had an indoor space to play away from the summer heat.

“My family is not going away during the summer holidays so I was worried about spending almost two months in an apartment.

“However, with the start of Sports World I’m excited I don’t have to worry about the heat while playing cricket,” said the 10th grade Pakistani student.

Ahmed, however, felt prices were a little high for his pocket money.

“I am sure, my father won’t mind paying because he doesn’t like it when I spend my time in front of iPad and TV.”

“Not every student in Dubai can afford such prices,” he said. “Sports World should consider offering better rates for students.”

Yasar Khan, an Indian father, however, did not find the attractions expensive.

“The prices are decent enough compared to the kind of facilities they are offering.

“Any place that provides such sports and physical activities, is in fact a blessing,” said Mr Khan, 40, a father of two children age 12 and 8.

Football and rugby were the most expensive lets per hour, starting at Dh575 during peak hours but falling to Dh225 off-peak.

There will be summer camps for schoolchildren will be laid on during the summer holidays.

Full details of sports, events and costs can be found at the DSW website on www.dubaisportsworld.ae.