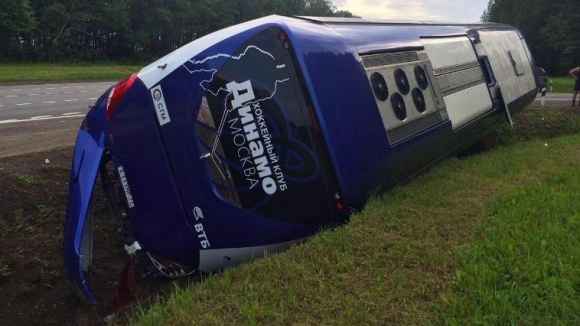 The vehicle turned over on its side and overturned in a ditch, no staff or athletes were injured.

The bus of hockey club HC Dynamo Moscow got into an accident on Tuesday night on the highway M-1 Moscow-Minsk, Smolensk region. The bus was carrying the players and the staff of the capital club to the city of Pinsk, Belarus, where the team are holding training sessions.

The correspondent of Izvestia managed to contact one of HC Dynamo players Alexei Tereshchenko, who was on the bus at the time of the accident.

“Our bus was moving quietly along the road without breaking any rules of the road” Tereshchenko told Izvestia immediately after the incident.

“And then, all of a sudden, we crashed into the vehicle ahead. The bus overturned and fell into a ditch. It is difficult to understand what really happened, what led to the accident, but the most important thing is that none of the people on the bus were injured. No staff nor the players have received any injuries.” Tereshchenko added.

Some time after the accident, HC Dynamo drove another bus to Pinsk.

HC Dynamo will hold a camp in Pinsk, Belarus during July. In early August, in preparation for the season, the team is scheduled to play in a tournament in memory Chernysheva, and in mid-August – Mayor’s Cup.

The Kontinental Hockey League kicks off on August 22.

Source: HC “Dinamo” The bus got in an accident near Smolensk. VIDEO – News