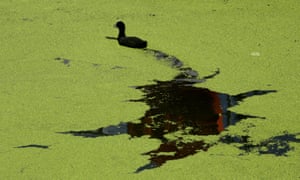 Duckweed on a canal in London. Photograph: Jonathan Hordle/Rex Features

The hot weather has been a boost for plants, and especially weeds. The heat triggered an explosion of duckweed that has smothered many canals and ponds, especially in London, where some waterways have been choked with carpets of duckweed so dense they looked like garden lawns. In fact, the Canal & River Trust recently removed 70 tonnes of the weed from canals in London.

Duckweed is only a tiny plant with miniature round leaves that float, but it grows and multiplies so fast it can quickly smother fairly slow or stagnant waters, starving wildlife in the water of light and oxygen.

Despite its troublesome reputation, duckweed also has its virtues. As its name suggests, ducks feed on it, and it provides shelter for spawning common frogs and toads. It’s got a big appetite for mopping up pollution from metals, animal waste, sewage and much else. Duckweed can be turned into biofuel by converting its starch by fermentation into ethanol, currently widely made from maize.

But duckweed is much more economic to grow. It makes more starch per acre, doesn’t take up valuable land to grow on, doesn’t need pesticides and fertilizers, and is easy to harvest and process.

Perhaps duckweed’s crowning glory could be as a valuable high-protein food. There’s already a flourishing market for duckweed as a foodstuff for ducks and fish in Vietnam, and it’s eaten as a vegetable by people in other parts of south-east Asia. The plant can also be grown hydroponically in tanks of water and turned into a powdered food containing 68% protein.

Source: Dabbling in duckweed: environmental uses for a green menace | Science | The Guardian