Auto mechanic Joe Valenti changes a battery in a Honda Acura at his garage in Dormont, Pa. Valenti has been keeping his customer’s cars on the road since 1979. Average annual growth has slowed each business cycle since then. Photo: Gene J. Puskar/Associated Press

Even seven years after the recession ended, the current stretch of economic gains has yielded less growth than much shorter business cycles.

In terms of average annual growth, the pace of this expansion has been by far the weakest of any since 1949. (And for which we have quarterly data.) The economy has grown at a 2.1% annual rate since the U.S. recovery began in mid-2009, according to gross-domestic-product data the Commerce Department released Friday.

The prior expansion, from 2001 through 2007, was the only other business cycle of the past 11 when the economy didn’t grow at least 3% a year, on average. Total growth this expansion ranks just 8th of the past 11 cycles. The U.S. economy, at the end of June, was 15.5% larger than it was when the recession ended in 2009.

The current expansion remains smaller than the one during Richard Nixon‘s administration. And that 16% expansion lasted just three years. The economy grew 18% from 2001 through 2007. It grew 52% from 1961 through 1969.

Despite the current expansion’s lack of intensity—or perhaps because of it—it is now one of the longest.

There have only been three longer expansions in the past seven decades. 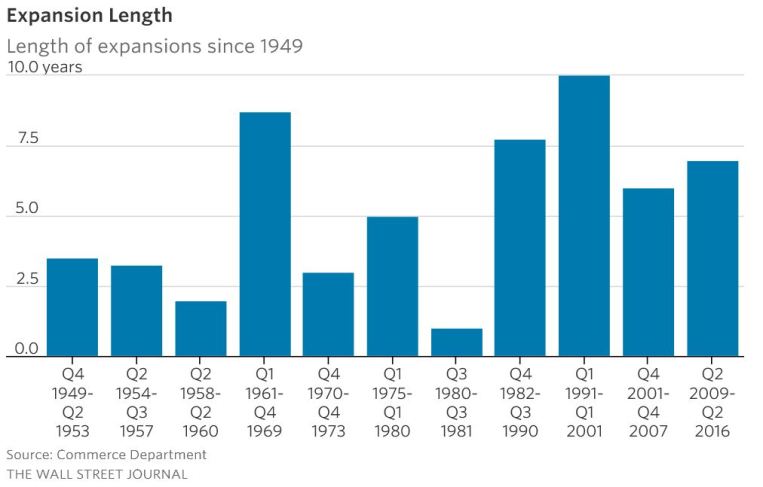 So far, it has occurred entirely during Barack Obama‘s time in the Oval Office, making it the longest expansion under a single president. The growth streak would need to extend just a little more than halfway through the next president’s term to achieve a modern record.

The average economic expansion since 1949 has lasted just more than five years. Only the expansion during the 1990s made it 10 years.