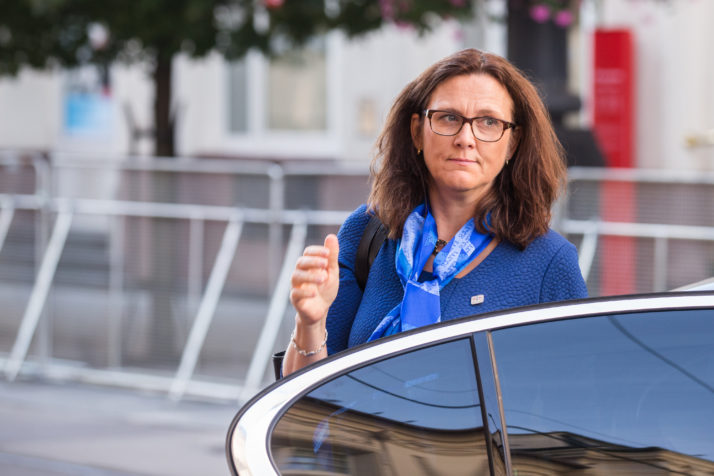 With CETA on track, the bloc keeps TTIP on life support.

BRATISLAVA — EU ministers have forged the political momentum required to seal their long-delayed trade deal with Canada but acknowledged that a more contentious pact with the U.S. will not be finalized this year.

At a meeting in Bratislava on Friday, the ministers drew up a plan to sign up to the Comprehensive Economic and Trade Agreement with Ottawa on October 18.

This sudden acceleration toward the diplomatic finish line was only possible after German Economy Minister Sigmar Gabriel earlier in the week secured overwhelming support for CETA at a convention of his often skeptical Social Democratic Party.

The SDP vote was followed by a similarly massive majority in the Bundestag.

Europe’s accord with Canada has become a defining test of whether Brussels is still able to steer the EU’s trade policy and the pact seemed in mortal danger while Germany’s commitment remained in question.

In Bratislava, Gabriel said he was now “very optimistic” that all 28 countries should be able to throw their weight behind the pact after months of tortuous diplomacy.

In addition to concerns in Germany, CETA’s advocates have needed to confront objections from Romania over visa reciprocity and Belgium’s Wallonia region about the rights of foreign investors to sue governments.

The most significant remaining hurdle, however, is Austria, where Social Democratic Chancellor Christian Kern has struck an increasingly hostile tone towards free trade.

Many diplomats, however, predicted that Vienna would ultimately sign on October 18, not least because of pressure from Berlin.