‘If things don’t turn around quickly, it’s going to have a lasting impact on the sport’

Nova Scotia’s severe drought has claimed another victim — the province’s recreational sport fishery is virtually non-existent, as rivers have dried up.

The head of the Nova Scotia Federation of Anglers and Hunters, Ian Avery, says the province’s 70,000 recreational fishers have nowhere to fish.

“When you go to any of the major rivers, you can literally walk across these rivers without getting your feet wet, whereas, normally you would be in knee-deep water,” said Avery.

Avery said the drought could have a lasting impact on the brook trout and salmon fishery if rivers don’t get replenished soon.

“As the water levels drop, the temperature rises, of course, and that means a lack of oxygen for fish,” said Avery. “It’s been an anomaly this year to the point where it’s a one in 100-year event. This has never happened in Nova Scotia in quite a long time.”

Avery says the recreational sport fishery represents a $76-100 million industry in the province.

He says fishing clubs have a contingency plan to restock the rivers with small fish once water levels rise. But, he admits, that could take a while.

“If we don’t get the rain, the fish won’t be able to travel to their spawning grounds, which means less fish next year and the year after,” said Avery.

“It will have a detrimental effect on future fishing.”

On the LaHave River near Bridgewater, N.S., an area that is classified class 4-5 rapids in the spring, is now a trickle. 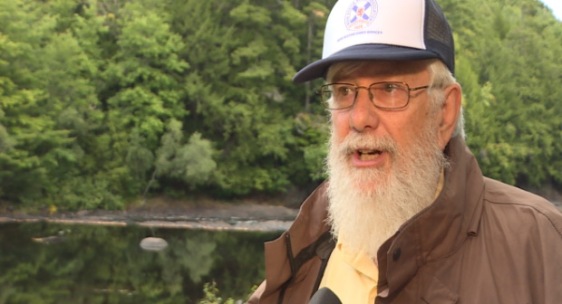 Carroll Randall, a registered fishing guide, says what is normally a beautiful paddle on the LaHave River, is now a hike. (Stephanie vanKampen/CBC)

Carroll Randall is a registered fishing guide, but he hasn’t had any customers this summer for trout or salmon due to the drought.

He says it is hurting the fishery, but the real victims are the fish.

“We could lose a whole generation of fish,” says Randall.  “The fish have to spawn, and if they can’t find a place to spawn, then all those eggs are lost, all those baby fish are lost, and it could mean some real trouble down the road.”

Rivers across the province are being described as “rock piles,” with historically low water levels, according to some guides.

Randall said the federal fisheries officers who have been monitoring fish numbers in the LaHave River have reported shockingly low numbers.

Randall said just 33 fish have passed through a fish way near Morgan’s Falls. In the past, hundreds have travelled the route.

He said even recent rains haven’t put a dent in the problem. Rivers need at least 200 millimetres of rain in order to save the fish.

Source: Major N.S. rivers dry enough to ‘walk across without getting your feet wet’