“I’ve developed well and have had some success and I’m a guy who has always stepped up to the next level when the challenge is calling,” Thatcher Demko said.

It all depends on how you look at it.

At the top end, it’s strong.

That’s the conclusion reached by ESPN prospect guru Corey Pronman, who has the Canucks 13th overall in the latest edition of his prospect pool ranking.

There’s plenty of reason to be excited about the golden trio of Olli Juolevi, Thatcher Demko and Brock Boeser. One could be a top-end defenceman, another an elite starter in net and the third looks to have elite sniper written all over him. The 2018-19 Canucks could be a real hotshot team.

“I think it’s the same thing for your whole life: whether it’s on the ice or off the ice, you have to be confident,” Juolevi, 18, explained. “Be yourself. Don’t be fake or anything. If you know your strengths, you can use those. If you’re good at something, you can say that. But you also have to know you have to improve other things.”

After he signed on with the Canucks, leaving behind a stellar record at Boston College, he told Ben Kuzma he’s ready to take on the challenge.

“I’ve developed well and have had some success and I’m a guy who has always stepped up to the next level when the challenge is calling,” added Demko. “I did get the opportunity to play at the world juniors against (Connor) McDavid, (Max) Domi and (Anthony) Duclair and that’s the closest I’ve been to the pro game. I expect faster guys and the pucks is going to be moving quicker.

“It’s just an adjustment period from a physical sense and just learning the grind of a pro schedule.”

And Boeser did everything you could imagine a college freshman could do, and then probably more.

He could have turned pro, especially with his father dealing with Parkinson’s and his mom working two jobs to support the family, but Boeser said he wanted to do another year of education. The Canucks’ cap planning benefits too. They save another entry-level contract year and you’d think they’d want to slot him right into the NHL. Boeser at 20 will surely be even better dynamite than he will be at 19. Muscle does matter.

“There’s definitely a thought about helping support them and getting some money,” Brock said. “But they also wanted me to go back to school and get another year under my belt, closer to a degree.

“It wasn’t that hard a decision. I think Vancouver and I were on the same page. Another year would really help me develop. I think I took a big step this year and I think I can take another step next year. (The Canucks) agreeing with me really helped. They didn’t push on me.

“I think it helps me build a relationship with them. It made it easier for me to make the decision to stay.”

The depth, though, isn’t much. The list has names like Gaunce, Pedan, Subban, Cassels, Sautner, Stecher, Brisebois and Zhukenov on it. Those are all interesting names — the first two have already played NHL games of course — but none of them screams possible star like Juolevi, Boeser and Demko do.

Brock Boeser is for real. The 18-year-old added three more goals to his total in two games over the weekend, extending his points streak to eight games. Boeser is now fourth in the NCAA in goals (first among freshman) and ninth overall in points (second among freshman).

Cole Cassels registered one shot on goal in two games this past week. The rookie is still looking for his first career AHL goal. 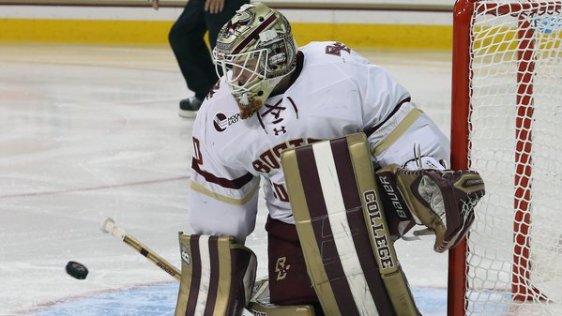 Thatcher Demko extended his unbeaten streak to 13 games with a win and a tie against Northeastern this past weekend. Demko stopped 55-of-61 shots fired his way as he sits in the Top 4 among NCAA goalies in wins, shutouts, goals-against average and save-percentage.

Alex Friesen tallied his fourth goal of the season and also picked up a helper in three games this past week. The 24-year-old has four goals in his past eight outings.

Brendan Gaunce has been out of action since November 21 with an undisclosed injury. No timetable for his return.

Alex Grenier snapped a five-game goal drought with his fourth of the season on Saturday night, sealing the Comets’ incredible third period comeback with an empty-netter.

After being held off the scoresheet in the first two games of the week, Nicklas Jensen got the party started on Saturday with his fourth of the season, kicking-off the Comets’ comeback that featured four goals in the final 6:13 of the game.

Ronalds Kenins was called up to the Canucks on Wednesday. He appeared in two games with the big club this past week, registering two shots on goal in 22:46 of ice time.

Hunter Shinkaruk left during the second period of Wednesday’s loss to the Phantoms with an injury. There is no timetable on when the 21-year-old will return to the lineup.

Jordan Subban didn’t register a point in two games played this past week. All eight of his points (1-7-8) this year have come in six games.

Linden Vey continues to struggle to find the back of the net, picking up just one assist in three games during the week. The 24-year-old has not scored in 17 straight games, and still has just one goal on the season. 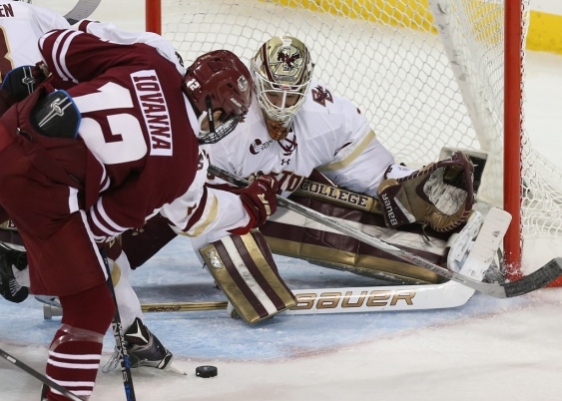 Demko just posted his sixth shutout in his last seven games, giving Canucks fans a whole new thing to be worried about — that Demko might be a figment of our collective imaginations. He’s just too good.

Hunter Shinkaruk scores another hat-trick, still isn’t bored with it

It looks like Hunter Shinkaruk is going to make it incredibly difficult to keep him down in the AHL this season. On Saturday, he scored his second hattrick of the season, giving him 9 goals and 12 points in 11 games.

Gaunce has taken that experience in the NHL and stepped up his game in his return to the AHL, putting up 2 goals and 4 points in 2 games since getting back to Utica. It seems pretty clear that he wants to make his way back into a Canucks jersey as soon as possible.

What’s the deal with Anton Rodin?

It’s hard to know what to make of Anton Rodin, who never seemed to adjust to the North American game in the AHL or, perhaps, wasn’t given an opportunity to truly shine. Whatever the case may be, he’s turning heads back in the SHL, leading the league in scoring with 10 goals and 24 points in 16 games.

Carl Neill keeps on keeping on

Neill continues to steadily roll along for Sherbrooke in the QMJHL. He’s currently on a 9-game point streak and has 18 points in 18 games — impressive production for a defenceman.

Guillaume Brisebois hasn’t put up the same kind of numbers as Neill, with just 5 points in 18 games, but he blows Neill away in the all-important highlight reel category. He scored a spectacular goal last week on an end-to-end rush that had the commentators making Bobby Orr comparisons.

Brock Boeser is an 18-year-old freshman in the NCAA

No need to be too concerned just yet, but after his 4-game scoring streak in which he put up 5 goals and 7 points, Boeser has gone quiet, with no points in his last three games. Considering he started the season going pointless in his first three games, he’s starting to look a bit streaky.

Source: The Prospector: Thatcher Demko is too good, might not be real