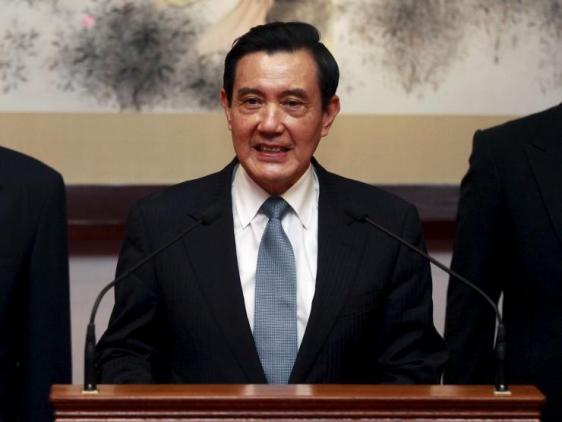 The first summit ever Saturday between the leaders of the People’s Republic of China and the Republic of China (Taiwan) represents a huge gamble for Taiwan President Ma Ying-jeou: Can Ma play the peacemaker and burnish the legacy of his Kuomintang (KMT) party, or will he be seen as caving in to Beijing’s might? Ma and mainland counterpart Xi Jinping are meeting in Singapore, just weeks ahead of January’s presidential and parliamentary elections on the island. The KMT, or Nationalist Party, is expected to take a beating from the opposition Democratic Progressive Party.

The meeting is not expected to produce any agreements or joint statements. During Ma’s tenure, 23 economic agreements have been reached with the mainland, promoting economic integration across the Taiwan Strait, and raising fears that Beijing is gaining political leverage over the island, which it has always claimed as its territory.

Kenneth Pomeranz, a professor of Chinese history at the University of Chicago, said mainland China seems to be trying a bit of reverse psychology in advance of the elections.

“The Kuomintang is probably going to lose power,” Pomeranz told International Business Times. “The mainland is thinking if they want to do anything to move the [integration] process forward, now is one of their last chances for a while. I suspect they’re also thinking back to previous elections when things were not going their way and they amped up pressure. That didn’t work. Now they want to see if being nice will help.”

Pomeranz called the meeting significant in that it sets a precedent — even if there are no announcements afterward.

“Even if nothing comes out of this meeting in a direct way … the symbolism of it has a real significance,” he said. “Somewhere down the line when some other mainland leader wants to do this, there will be a precedent. Precedents matter. They might not get much much in the short run, but the fact it has happened could be something we look back on and say, ‘Gee, that made another step in making cross-strait relations a little easier.’ ”

Tsai Ing-wen, the DPP’s presidential candidate, told reporters the meeting will damage Taiwan’s democracy and called the scheduling “hasty and chaotic.” “I believe people across the country, like me, felt very surprised,” she said in prepared remarks.

DPP spokesman Cheng Yun-peng said the summit was called to “affect the election,” but Andrew Hsia, head of the government’s Mainland Affairs Council, said China’s Taiwan Affairs Office initiated the overture and no secret deals were made.

For decades, Taiwan billed itself as the only true China, ruled by Chiang Kai-shek, who was chased from the mainland by Mao Zedong’s communist forces in 1949. Leaders of the two sides have not met since. For the two entities to create a lasting peace, Ma needs to convince Xi that any talks must include the DPP, without forcing the DPP to embrace the “one China” policy, the Economist reported. Tsai’s party is pushing for a permanent separation from China, something the mainland has always firmly opposed.

The Taipei Times reported that Beijing is pushing Taiwan to accept the “one China” policy, and the issue was reported still under negotiation as of late Friday. Taiwan wants to maintain the so-called 1992 consensus, a tacit understanding that there is only one China, but each side has its own interpretation of what that means.

A pro-Taiwan independence protester wears a Taiwan T-shirt outside the parliament in Taipei in 2008.  Sam Yeh/AFP/Getty Images

Pomeranz said even if the DPP comes out ahead in the elections, it is unlikely it would sever the deals Ma has spearheaded.

“There are just far too many Taiwanese economically tied up with the mainland,” Pomeranz told IBT. “Even if you’re not risking military action here, there are just so many people doing business, so many people visiting relatives, so many mainland tourists visiting. I really doubt the DPP wants to do anything sudden.”

Ma has been trying to improve relations with China since he was first elected in 2008, although some of the island’s residents fear he will sell out to their huge neighbor. Ma, however, has asked China to stop threatening the island (the Chinese coast is bristling with missiles aimed at Taiwan) and has insisted that for Taiwan to contemplate unification, the mainland first would need to become democratic, the Economist reported.

There’s a vast difference in the living standards between between China and Taiwan. Data compiled by the Peterson Institute for International Economics show per capita earnings are five times higher in Taiwan than the People’s Republic.

The mainland’s state-run Xinhua news agency called Saturday’s meeting a “breakthrough in communication between the leaders” and a “milestone for cross-strait relations.” One of the oddities of the talks is neither leader was to address the other as president: They were to use “mister” instead.

“We encourage authorities in Beijing and Taipei to continue their constructive dialogue on the basis of dignity and respect,” she said, refusing to comment on whether there would be any impact on U.S. arms sales to Taiwan.

What does China get out of this meeting?

“China gets to keep going a process of gradual deepening engagement, which they figure in the long run works for them,” Pomeranz said. “They would like to absolutely minimize number of people on Taiwan who would contemplate a serious break. The more they can keep the process of engagement going … the more businessmen involved, the more people there are to count on visitors from the mainland, the more people who have relatives — not just going back 70 years but new marriages — the better in the long run that is for Beijing.

“If they’re worried all those processes are about to be interrupted or slowed down, anything they can do to push them forward is something they see as positive. By making a gesture they perceive as friendly, they think they’ll help the KMT in the elections.”

Protesters tried to storm parliament in Taiwan overnight as the island’s leader Ma Ying-jeou left for a historic summit in Singapore with Chinese President Xi Jinping.

The meeting will be the first between leaders of the two sides since their 1949 split following the Chinese civil.

Closer ties with China have sparked fears over Beijing’s growing influence with President Ma’s opponents accusing him of selling out Taiwan by attending the summit.

The meeting comes ahead of presidential and parliamentary elections in Taiwan in which the independence-leaning Democratic Progressive Party (DPP) is favoured to win, something Beijing is desperate to avoid.

The Nationalists, also known as the Kuomintang (KMT), retreated to Taiwan after losing the civil war to the Communists, who are still in charge in Beijing.

Taiwan has never formally declared independence from Beijing, which sees it as a renegade province to be reunified with the mainland, by force if necessary.

Around 100 protesters tried to storm the heavily-guarded parliament building in Taipei carrying “Taiwan independence” banners, but were stopped by police.

There were no arrests.