The Canucks were going for their third win of the road trip, and the Boston Bruins were trying to extend their winning streak to four games.

Jacob Markstrom stopped 28 of 30 shots  for the Canucks for a .933 Sv%; Sven Baertschi, had his 4rth goal in 6 games (9th of the season); Alex Burrows, had his 2nd goal in consecutive games (7th of the season); Linden Vey had 2 assists; but it was Daniel Sedin who rose up with two unanswered goals to put the game away for Vancouver, the last one an empty netter, as the Canucks finally won their 20th game of the season, defeating Boston 4 to 2.

With the two goals, Daniel Sedin took over top spot in Canucks All-Time goal scoring, recording his 347th and 348th goals of his career, all in a Canucks uniform, surpassing Markus Naslund. The goals were his 20th and 21rst of the season.

NEW YORK, NY – JANUARY 17: Daniel Sedin #22 of the Vancouver Canucks prepares to skate against the New York Islanders at the Barclays Center on January 17, 2016 in the Brooklyn borough of New York City. The Canucks defeated the Islanders 2-1 in the shootout. (Photo by Bruce Bennett/Getty Images)

Bo Horvat, Radim Vrbata, Alex Edler, Chris Tanev, Jannick Hansen and Derek Dorsett, also had helpers in the Vancouver victory, improving their record on the road trip to 3-1-1, with one game left. 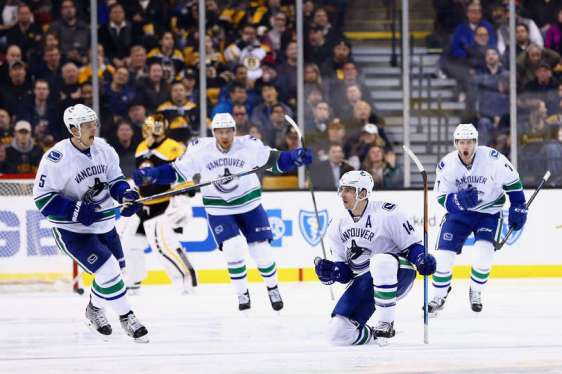 BOSTON, MA – JANUARY 21: Alex Burrows #14 of the Vancouver Canucks, second from right, celebrates wiht Luca Sbisa #5 and Linden Vey #7 after scoring against the Boston Bruins during the third period at TD Garden on January 21, 2016 in Boston, Massachusetts. The Canucks defeat the Bruins 4-2. (Photo by Maddie Meyer/Getty Images)

The Canucks move into 2nd place in the Pacific division of the Western Conference, ahead of Arizona and tied with San Jose,  with 51 points. Vancouver are  4 points ahead of Anaheim and 10 points behind the first place Los Angeles Kings.

“Yeah, I mean, it hasn’t been pretty. That’s for sure,” Sedin said. “But we’ve got to remember, too, the amount of injuries we’ve had, and guys have stepped up in our lineup, and playing roles that maybe it’s tough for the guy stepping into, and they’ve done a great job. I think we’re working hard, we’re trying and doing our best, and the main thing is we’re doing it for each other. That’s a good feeling.” 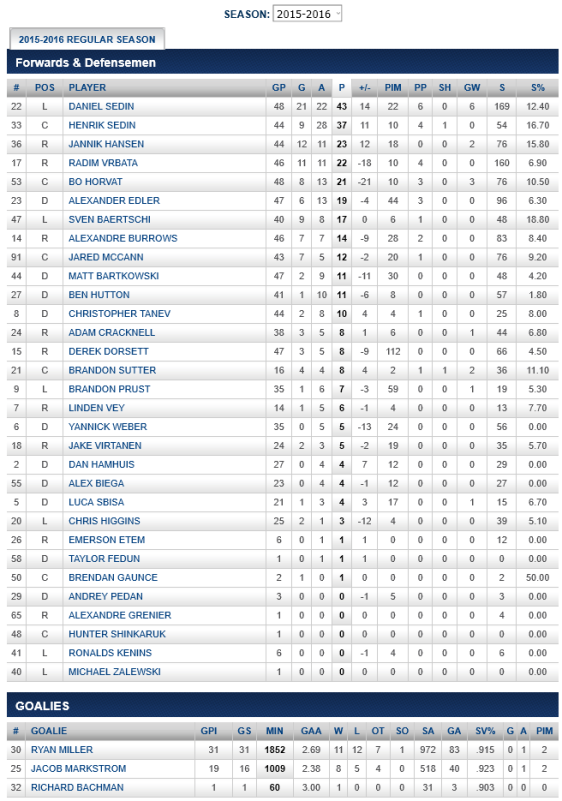