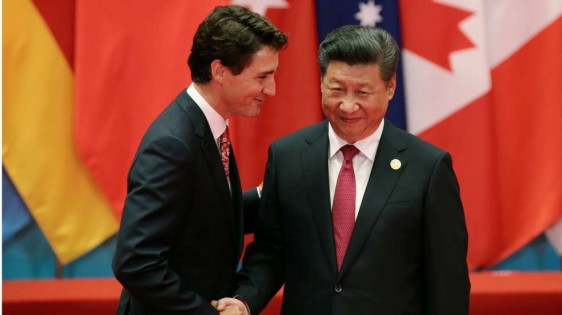 Canada says the talks, long-sought by Beijing, are unrelated to the recent release of a Canadian held by China for two years on spying charges.

Canadian Prime Minister Justin Trudeau sidestepped questions on Tuesday on the sensitive topic of possible extraditions to China, saying Canada would stick to high standards when deciding whether to return Chinese citizens.

A statement posted on Trudeau’s website said his national security adviser went to Beijing last week and agreed to start talks about an extradition treaty as part of a security dialogue.

China, which wants the return of officials suspected of corruption who it says are hiding in Canada, has long pressed for such a treaty.

Some Western countries are reluctant to sign extradition deals with China, partly out of concern about the integrity of its judicial system and treatment of prisoners.

Some people convicted of corruption face the death penalty. Canada refuses to send people to countries without assurances they will not be executed.

“Extradition is certainly one of the things the Chinese have indicated they want to talk about,” Trudeau told a televised news conference at the United Nations.

“As everyone knows, Canada has very high standards in terms of extradition treaties in accordance with our values. But we’re happy to have a high-level security dialogue,” he said.

News of the Beijing meeting revived speculation Ottawa had made concessions to secure the return of Kevin Garratt, a Canadian citizen convicted of spying, whom China deported last week.

Kevin Garratt, a Canadian held in China for two years on suspicion of spying, with wife after been freed and arriving in Vancouver on Thursday, September 16 in a diplomatic triumph for Prime Minister Justin Trudeau.

Canadian officials insist there was no deal, and that the Garratt release was unrelated to the extradition talks.

Garratt’s release was widely seen as a triumph for Trudeau, who visited Beijing earlier this month in a bid to seal closer economic ties. Chinese Premier Li Keqiang arrives in Canada on Wednesday for the start of a three-day trip.

“Does the prime minister not understand that our openness to China should be about encouraging China to adopt our values for human rights, as opposed to us giving in to China’s?” interim party leader Rona Ambrose told the House of Commons.

China does not have extradition treaties with the United States, Australia or Canada, which according to state media are the most popular destinations for suspected economic criminals from China.

A number of suspects wanted by China are known to reside in Canada.

They include the Vancouver-based property developer Michael Ching Mo Yeung, who is wanted by China for alleged embezzlement and concealing stolen funds.

Ching, who is seeking refugee status in Canada, is wanted under the name Cheng Muyang. He is the son of Cheng Weigao, the former Communist Party secretary of Hebei province who was expelled from the party for corruption and died in 2010.